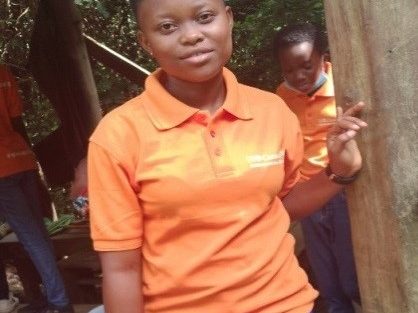 When the journey of life abruptly became dark with an uncertain future, Ms Maame Yaa Owusu, then 17-year-old Junior High School leaver’s aspirations of furthering her education to become a nurse in future was shattered.

Due to financial and resource restrictions, her mother,  under whose care Maame Yaa directly was, made the painful decision to sacrifice Maame Yaa’s future education for her elder sister’s schooling, since she could not afford the cost of two children attending school at the same time.

This got Maame Yaa infuriated and dejected. In protest, Maame Yaa began going out of her abode recklessly and hardly stayed at home to avoid having a confrontation with her mother and family.

She spent most of her time with friends who were also out-of- school. In no time, Maame Yaa became friends with wayward school drop-outs, whiling away her time at a popular meeting ground in her community known as the 1911-Park corner. That is the spot widely regarded in Blengo (a community in the Volta Region of Ghana) as the “college for out-of-school youth” and perceived as the breeding ground for prostitution, teenage pregnancy, gambling, alcoholism, narcotism and other social vices. As expected, in no time, Maame Yaa became highly exposed to these social vices.

However, change came by chance one Sunday afternoon when Maame Yaa, while at the “college,” noticed three Volta Educational Renaissance Foundation (VEReF) trained Adolescent Health Champions (AHCs) on their way to the weekly Adolescent Peer Network Meeting. These three AHCs were neatly dressed in their branded project costume, a yellow Lacoste with the UNFPA Ghana logo on the upper front and two sets of inscriptions on the back: Let’s talk about it! #shedecides.

After reading the inscriptions, “Let’s talk about it! #shedecides,” Maame Yaa became curious and convinced that her life could be transformed by engaging these girls. She then defied the advice and protests of her friends and joined the company of the three AHCs to the weekly Adolescent Peer Network Meeting at Blengo.

Her high level of interest and enthusiasm compelled VEReF, the project implementing partner in the South Dayi District, to train and subsequently enroll her as a volunteer AHC and a Special Ambassador under the RHESY Project for Blengo. Through the project, Ms Maame Yaa Owusu has gained a wide range of life and vocational skills, and time-tested techniques of handling sensitive issues like defilement, rape, child marriage, and domestic violence, sexual and gender-based violence as well as baking and ice cream making.

Maame Yaa Owusu, now 19 years, has remained a committed AHC under the RHESY Project in South Dayi even though she is currently attending a remedial class to write the West African Senior School Certificate Examination in order to continue her education and pursue her childhood dream of becoming a nurse.

“As an Adolescent Health Champion, I have become even more empowered and enlightened on my sexual and reproductive health rights. I have become very assertive, and now, I just can’t stop my daily education of out-of-school adolescents as l impart knowledge to my peers although I am back to school.”

According to Maame Yaa, her going back to school became possible because of the support she received from VEReF and the monthly allowances that she received as an AHC under the project.

“With all hope lost, l sought solace in VEReF. The training, motivation, gifts, and psychosocial support I received from VEReF changed me instantly, completely and permanently. Even when I was not recruited as AHC, VEReF was always there to support me financially for being regular and active at Peer Network Meetings.”

Maame has been a shining example of an AHC, having virtually collapsed the “drop-out college” at the 1911-Park by educating and subsequently enrolling eight adolescents (5 males; 3 females) from the ‘college’ into the Peer Network Meeting group at Blengo. Thus, Yaa is now a role model for many adolescents at Blengo. Maame Yaa is determined to become a nurse, a social worker and an advocate for adolescent girls, while leading the campaign for equitable access to quality adolescent sexual and reproductive health and rights (ASRHR) services and products.

“I am the new Maame Yaa who escaped from death to life through the RHESY Project. I thank UNFPA Ghana and Alliance for Reproductive Health Rights for initiating this project to save my life, and I thank VEReF for sustaining my life. Sometimes, I feel like this should not be a project but a religion because every activity under this project is not only life-transforming but also soul winning,” she said.

Reclaiming the gains for women and girls: Let’s listen to community advocates 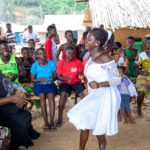