A total of 381 adolescents between the ages of 10-19 years have been reached through the organization of eight (8) drama activities in five (5) project districts; Bosome Freho, Ashiedu Keteke, South Dayi, Nzema East and KEEA as part of activities towards the Reproductive Health Education and Services for Young People (RHESY) Project. The drama activities centred on various themes including teenage pregnancy, why there is a need for regular parent-child communication, stigma and discrimination, drug abuse, values, peer influence, contraceptive use, sexual and gender-based violence, child abuse etc.

These activities were organized to empower adolescents to exercise their agency with regard to Sexual and Reproductive Health and Rights (SRHR). The drama sessions also raised awareness on the need to address misconceptions about family planning and contraceptive use among adolescents. Of the total number of adolescents reached, 344 were females while 37 were males. Of the 344 females, two had disabilities – visual and intellectual impairment.

To ascertain the impact of the drama activities, participants were asked to indicate key learnings from the drama of which they adequately did. The adolescents were also given the opportunity to ask questions and seek clarification on SRHR issues that they did not understand.

Community members, particularly, adolescents in Ashiedu Keteke sub- metro were happy with the sexual and gender-based violence theme chosen for the drama event as it highlighted one of the major issues faced by adolescents in the sub metro. They indicated that there were several instances of adolescents being sexually abused in the community which had created a worrying situation. They expressed satisfaction with the awareness created through the drama activities which will change community apathy and behaviour towards victims of sexual violence and abuse.

ARHR will continue to engage CBO partners to focus on a cross-cutting theme for future dramas to ensure consistency and oneness in approach in addressing societal issues. The Rhesy project is being implemented with funding from UNFPA Ghana.

The Declaration of Astana: Time for Stocktaking and Action 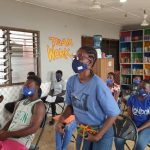 Peer Network Meetings; a Reliable Approach to Sensitize Out-of-School Adolescent Girls on SRH and Link them to Services