Peer Network Meetings; a Reliable Approach to Sensitize Out-of-School Adolescent Girls on SRH and Link them to Services

33 peer network meetings, with at least five (5) meetings each in six (6) project districts; Ashiedu Keteke sub metro, Bosome Freho, South Dayi, KEEA,  Nzema East and Jirapa have been used as a reliable approach to sensitize out-of-school adolescent girls on their sexual and reproductive health and rights in the first half of the year.

The peer network meetings served as platforms for adolescent boys and girls to discuss their SRH issues and be empowered to exercise their agencies. The initiative was part of activities to implement the Reproductive Health Education and Services for Young People (RHESY) project, with funding from UNFPA Ghana.

During the peer network meetings, sanitary towels were distributed to adolescent girls during Cube Convos sessions. Topics such as personal hygiene, personal development and sexual and gender-based violence, values, STIs, self-esteem, adolescence and pregnancy, negotiation skills and assertiveness were discussed during peer network meetings. The meetings were mainly interactive with various participatory learning skills employed by facilitators. These skills were employed to stimulate thinking among adolescents and included approaches such as role plays, song singing, demonstration/practice, jokes and stories. ARHR’s district-based partners engaged the services of health providers and legal agencies such as CHRAG and DOVSSU officers to support the education of adolescents during these meetings.

In some districts, parents continued to discourage their wards from participating in peer network meetings due to the fear following an increase in the number of COVID-19 cases after the Christmas period. It was also noted during the quarter that there was the need to develop simple and user-friendly educational materials which out-of-school adolescents can read or easily access for information on their sexual health.

One strategy used to mitigate the challenge of parental apprehension with regards to their wards contracting the Corona virus was the use of community radio in some districts to reach out with information to adolescents in communities within the district. There was also insistence on participants adhering to the safety protocols including wearing of face masks before and during peer network meetings. 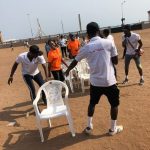 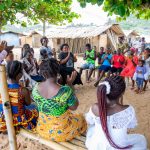