The future is accessible; Agya Bentil shows how!

At the age of 17 years, he experienced a medical condition which made him visit the hospital often; yet without any solution to the condition. With time, his condition worsened and he was left with a visual impairment. This made him a ‘burden’ to his family; even though they tried to make him comfortable. He lost his confidence and courage as a result of his health impairment. He never got the strength to do anything for himself; left alone to do something for his community.

At the age of 60 years, Agya Bentil, a person with disability at Dabir, KEEA, was privileged to be part of a community education programme organized by ARHR with support from its Community-Based partner; PEYORG, and funding from Star Ghana Foundation, where he heard about a project which sought to ensure that gender equality and social inclusion is systematically integrated in UHC in Ghana through national policies, programmes and commitments in health.

Through the community education, Agya Bentil was introduced to his health rights which empowered him to access health facilities and services in his community without fear. Agya Bentil asserts that previously, he found it difficult to access the health facility in his community because the facility staff were not friendly to him and gave him a lot of attitude due to his visual impairment.

However, after learning about his health rights as indicated in the Patient’s Charter, he freely attends the health facility when he is not well without feeling intimidated. He mentioned that initially, he felt bad about the way he was treated by the facility staff but currently, he insists on his rights and does not bother about the attitude of the facility staff. Agya Bentil now asks questions concerning his health whenever he visits the health facility for health care and makes sure he is provided with all the answers needed before leaving the facility.

Due to his lack of confidence and strength, he could not be gainfully employed. After being empowered to understand that he was part of the community regardless of his visual impairment, he went to see the Ghana Water Company Limited (GWCL) in his district on an abandoned water bore hole in his community. He engaged them and convinced them to complete the bore hole for him to sell the water to the community members who did not have any portable means of water. He believed that will enable him to make a living out of the proceeds of the sale and also help the community members to get a good drinking water.

Currently, Agya Bentil manages the bore hole in his community which helps the community members to get access to water. His only challenge is that community members do not patronize the bore hole water when it rains because they harvest the rain water; and so sales during the those periods are very low. He is however thankful for the GESI project which has empowered him to take up the bore hole initiative and also opened him up to much knowledge concerning his health rights. 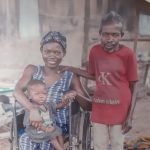 Leaving no one behind through the promotion of social accountability at the local-level: a spotlight on Gender Equality and Social Inclusion (GESI) in Ghana